In 1999, Mark approached Bob about possibly purchasing an already popular and successful driving school operating in Northeast Philadelphia. Bob was very interested in the idea. The two brainstormed for many hours and many evenings in Bob’s basement, putting together a business plan to purchase the up-and-running school. Things did not work out as planned with that venture. At that point Mark and Bob made a very nervy and important decision. To open a startup business to be called Blue Bell Driving School.  After the purchase of a single car in 2001, an office/classroom was set up in Bob’s basement and Blue Bell Driving School opened for business in October, 2001. The rest is history. A decade and a half later, Blue Bell Driving School is the premier choice for driving instruction in the Delaware Valley, operating a fleet of 10 vehicles and employing the most qualified, dedicated and sought-after instructors anywhere! 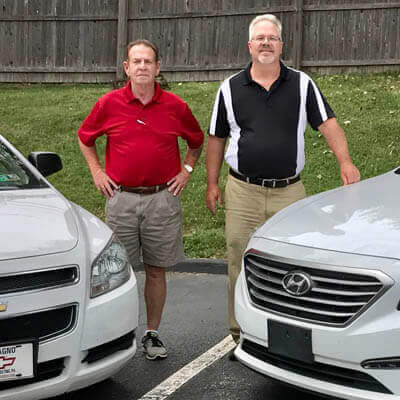 Passionate, enthusiastic, and patient to make each student feeling comfortable and confident with the most up-to-date defensive driving advice and information on drive test criteria.

Ken has has been with our company for 5 years, We are told how great he is at teaching students. His professionalism is ever present and his students get the added benefit of great life lessons.

Bob has been with Blue Bell Driving School for 11 years and gives lessons in Plymouth Meeting, Ambler, Lafayette Hill, and King of Prussia. Bob is great with teen and adult drivers alike.

Bringing a wealth of experience and enthusiasm to Blue Bell Driving School. Michael attended Temple University for music education and North Montco Tech to obtain his CDL license. His years as a music educator and CDL driver.